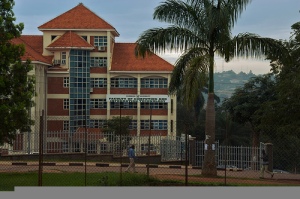 Today we had some unfortunate news. The reality is that technology has greater value when in short supply. I can tell you how hard the Makerere team has worked to put good infrastructure into place. The drawback is that they are now sitting on the best equipment in the country. Security remains an issue and is something that has also been mentioned by individuals in the private sector. Great hardware and solid internet connections remain a sought out resource.

UNIDENTIFIED thugs have broken into the Faculty of Computing and Information Technology at Makerere University and vandalised over 230 computers, before making off with memory chips and processors.

A total of 101 memory chips and 140 processors were on Easter Sunday stolen from the laboratory on the fourth and fifth floors of the building, the Police said yesterday.

Police spokesperson Judith Nabakooba yesterday said the faculty had incurred a loss of about sh96.4m. She added that they were holding seven suspects in connection with the incident.

Nabakooba identified the suspects as James Omachan, B Mwesigye, John Bosco Tumusime and Amos Kagaba, all laboratory technicians. Others are Mathias Ruhuma, a custodian, Charles Komakech, a university guard and Bashir Turyahebwa, a private security guard attached to Ultimate Security.

The suspects, Nabakooba said, were being held at the Wandegeya Police Station on charges of office break-in. The vandalised laboratory is the biggest information communication technology (ICT) facility at the university.

The faculty dean, Prof. Venansius Baryamureeba, yesterday said the matter was being jointly investigated by the Police and the university security department. “It seems the thieves had ready market for the software,” he said. The stolen property was worth about sh20m, Baryamureeba said.

He explained that they were still assessing the extent of the damage, adding that the staff members implicated in the theft would be forwarded to the university disciplinary committee.