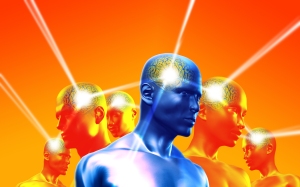 Nairobi — Kenya is seeking the services of leading mobile phone companies in an ambitious campaign to market the East African Community Common Market. In an Obama-inspired campaign — where ICT played a major role in galvanising public support — the country plans to educate all the 17 million Kenyans who own mobile phones on how they stand to benefit from the Common Market, whose protocol was signed a month ago. It will do this through short text messages. Radio will also be used widely — targeting mainly rural areas. END_OF_DOCUMENT_TOKEN_TO_BE_REPLACED

Text To Change: Spreading the Message to Stop the Virus 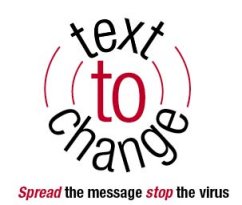 “Using SMS technology to spread information about HIV/AIDS among mobile phone users in sub-Saharan Africa in order to measure, analyze and improve knowledge, attitude and behavior regarding HIV/AIDS prevention and treatment.”

Over the past decade mobile phones and services have taken Uganda by storm. Thanks to the ease in getting a prepaid phone number and the relatively cheap phone prices and phoning costs, mobiles have penetrated the largest part of the population. The mobile phone has provided people, ranging from the densely populated cities to rural communities, with the powerful and life influencing means of distanced communication. These developments have opened-up new doors for health, awareness and education initiatives. With HIV/AIDS being a large health issue, Text To Change  (TTC) is “harnessing the powers” of mobile phone technology by “using it as a medium to communicate health related issues and to support existing prevention campaigns”.

Through an interactive SMS-quiz which lasts several weeks, questions and information about HIV/AIDS is spread among a large amount of mobile phone users about 3 times a week. During the pilot project in 2008 (which has been a great success) a total of 15.000 active mobile users in the Mabarara region were targeted. 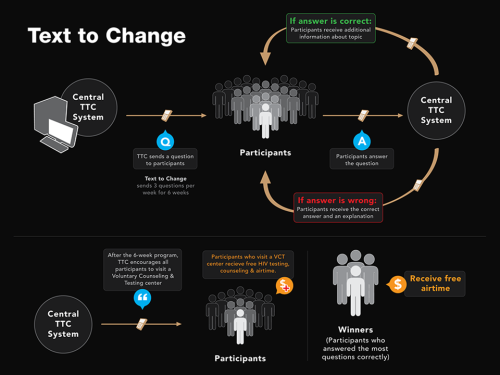 During the program a significant increase has been noticed on patients who came in for testing during a six week period, from 1000 to 1400. This shows the actual impact the project has and the potential it possesses to support in education, awareness and combating disease.

Through this program valuable data and information is collected on the current state of knowledge and awareness amongst the population, which in turn is relayed to health clinics and other organizations in order to improve programs and methods. As they state, “Text to Change aims at establishing partnerships between governments, public and private companies, non-governmental organizations (NGO’s), financial institutions and medical experts. Joining forces to achieve a common goal for mutual benefit by sharing skills, resources and risks could be the key to an actual change”.

All together, the TTC project provides a solid base for communicating relevant knowledge to the masses, educating the nation and fighting disease strategically. By seeking a broad range of partnerships and redeveloping their software in open-source they expand the range of possibilities and thus the impact the program can have nationwide (and even continent- or worldwide). Therefore Text To Change is in my opinion, well on its way in achieving their ambition, which is, “to become a global platform of telephony health services”.